Since the introduction of Critical Chain Project Management in 1997, I’ve been surprised several times to run into talented project managers that nonetheless just couldn’t see how much of an innovation CCPM  was over traditional project management methods like critical path and PERT. Never-mind that  only 56% of  typical projects finish on-time and 70% finish with a significant shortfall vs. their original scope.

For some reason, they  just couldn’t see the value – even with key improvements such as:

But even with all these improvements vs. traditional project management approaches, CCPM has hardly been standing still over the last 15 years – especially as computing power continues to enable innovation with more powerful planning algorithms. The latest such innovation is the Early Warning metric from Exepron. 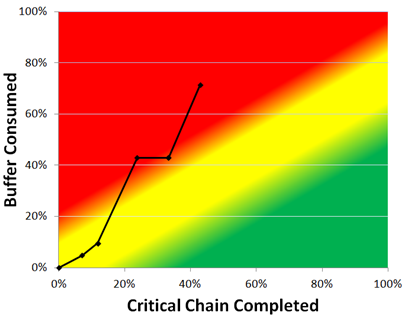 In some ways, the CCPM fever chart already provides a kind of early warning showing when buffer is being consumed faster than when the critical chain is being completed. But Exepron Co-Founder, John Thompson, is quick to point out that the fever chart is missing one critical dimension – and that’s time.  At first, it’s easy to miss this because we infer time along the bottom axis as the project is completed. But as anyone who has ever worked on a project with a large integration points at the end knows, integration risks can obscure the amount of time required along your Critical Chain.

For example, if you have completed 80% of the critical chain while only having consumed 60% of the buffer, a quick look at the fever chart would tell you that you’re in reasonable shape. Most of the time that would be true, but in the case of a project with a large integration point near the end of the critical chain and significant penetration of the feeding buffer, it is possible that you might not be able to finish before running out of time.

That’s where early warning comes in. Exepron‘s other Co-Founder, Danny Walsh, describes it as an indicator of whether you have enough runway left to make your takeoff. With a proprietary algorithm that looks at all of the risks and the rate at which both the project buffers and feeding buffer penetration is changing, Exepron adds the dimension of remaining time as a compliment to the fever chart. By comparing remaining time to the task durations, you get a signal that tells you when a project is getting dangerously close to a late finish unless drastic action is taken. 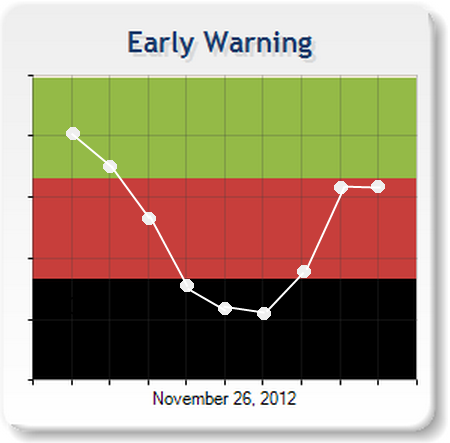 In the chart to the right, the project starts out in the green but rapidly becomes a risk as it falls into the red and then eventually into the black meaning it will definitely finish late unless big changes are made. In this case, the project moves back up into the red meaning that management and/or the project team took significant actions to get the project back on track. They might have added resources or even have found a way to eliminate steps on either the critical chain or a delayed feeding chain.

Early Warning is a welcome addition to the tools that CCPM already offers providing even better visibility into project status. It’s going to be fun to see what these folks come up with next.