Could you disrupt your own business? 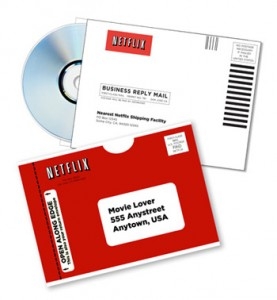 Guts – That’s what it takes to disrupt your own core business.

That and a clear strategy for where you are headed – that is if you have any hope of surviving.

A recent example that’s been fascinating to watch is Netflix, as CEO, Reed Hastings, navigates the transition from snail mailing DVD’s to streaming movies.  Hasting’s actions over the last year have sometimes left both customers and investors scratching their heads, but last week’s moves give much clearer insight into their strategy.

One of the key lessons from Christensen’s “Innovator’s Dilemma” is that disrupting your own business is nearly impossible. Organizations are built to sustain and will repel disruptive change like white blood cells going after an invading virus. Similarly, existing customers, the ones that in this case like the DVD model, aren’t necessarily interested in trading-off variety and selection for instant gratification.

Hastings seems to have recognized that danger and is borrowing a page out of the IBM playbook to protect his disruptive business – the one that he sees as generating the most value in the future. While focusing Netflix on streaming, they are splitting off the DVD by mail business as a separate Qwikster business.

That same approach was how IBM was able to disrupt it’s own mainframe business. The mainframe business naturally saw PC’s as either a threat or a useless hobby and would have, in either case, starved it for resources. To get around this IBM leadership set up the PC business as a completely separate entity located in a separate Boca Raton, Florida location and reporting directly to the CEO.

Ultimately, IBM disrupted itself and created a new business worth several billion dollars while still being able to capture as much of the value as they could from the declining mainframe business. A lesson for any company facing new technology that could disrupt it’s core business.

PS – Two weeks ago when I wrote this it looked as if Netflix’ irrational behavior might be part of a clever disruptive strategy. Now, with the announcement to drop the Qwikster split, either CEO Reed Hastings never understood the disruptive strategy, or they didn’t pull the trigger fast enough and the online business is being held captive by the old line customers. What are your thoughts?

What’s Your Governance Strategy for Dealing with New Product Delays?